After constructing a large retaining wall to create the only real flat area on the property, the owner of Blue Water Manor, John Kelly, sat back to think about what the best way was to utilize the space.  With intentions of building a larger hotel building the thought was to have a pool.  The pool would have a great view of Lake George and be a central location of the resort.  He didn’t want just your basic pool design.  After getting one design from a company in Albany that was more of a water park design John wanted to explore more options.  After having completed the very successful wedding venue project he asked DeFranco Landscaping owner, Tony, if he had any thoughts.  Tony introduced John to Fred Pape who has extensive experience designing and building large natural water features around the country.

After hearing John’s ideas and wishes Fred worked up a design that incorporated a pool and pond that looked to be as one.   This was a much more Adirondack inspired design than the one he had received from the other company.  While working to tweak the final details, unfortunately, the plans for the hotel were hitting some regulatory snags so the pool-pond project was put on hold.

In the Spring of 2018 while Tony was working with the crew to get the gardens around Blue Water Manor cleaned up, he heard John call his name.  He walked over and said its time to move the pond project forward.  Since the hotel wasn’t happening, he wanted to scrap the pool idea and just make it a nice pond and waterfall for an area to hang out while waiting for a table, a place to take wedding pictures, and an additional space for private events.  Tony and Fred worked to adjust the design to best incorporate the most features into the space.   The final design incorporated a large koi pond with massive stone slabs cantilevered over the water.  A constructed wetland would be placed near the entrance with steppingstones through it allowing visitors to “walk on water” while being surrounded by lush aquatic plantings.  Not only would this wetland be beautiful, but it would play a vital role in filtering the pond and keeping the water clean and clear.  A massive waterfall with 32,000 gallons per hour crashing down would be the centerpiece of the project.  Multiple bridges were to be built around the feature to allow visitors to interact with it from many angles.  A smaller scale mountain stream would also guide visitors to the adjacent fire pit area.  With the final design approvals from John, the DeFranco team set out to start prepping for this monumental project. 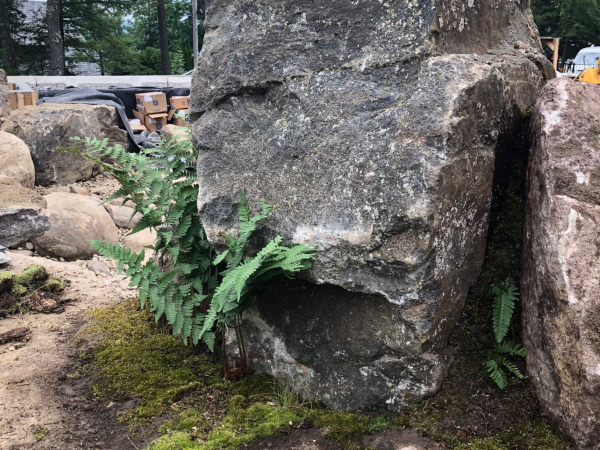 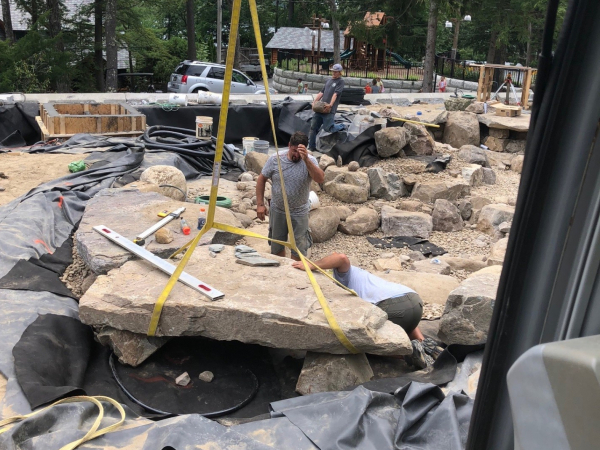 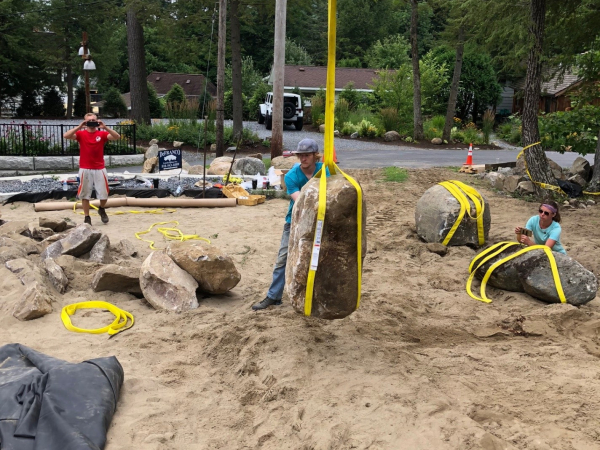 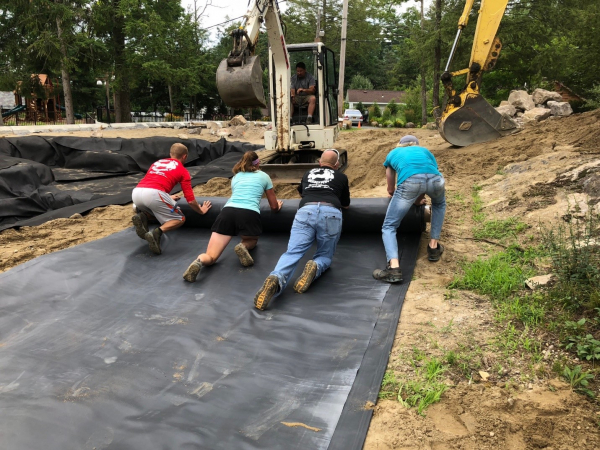 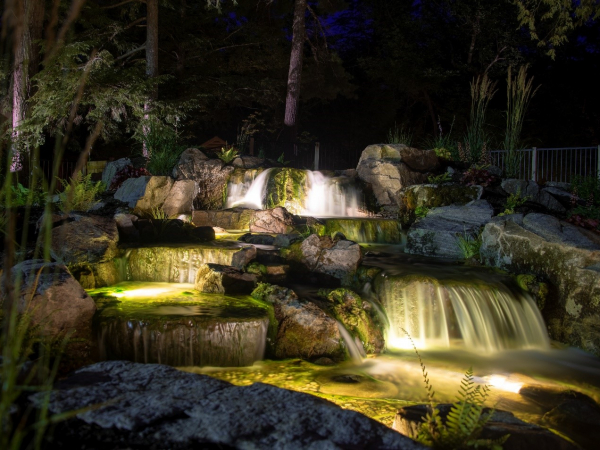 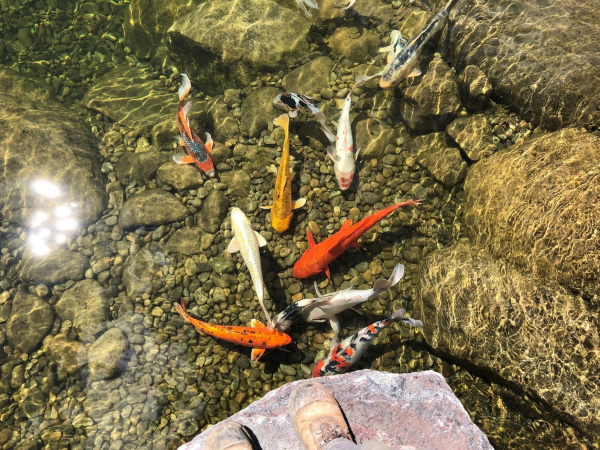 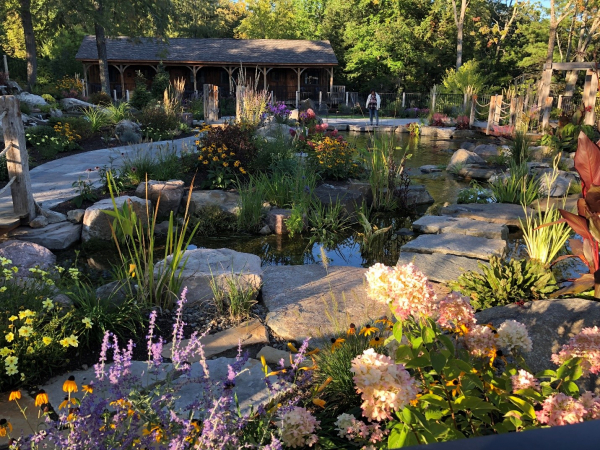 Figuring out the necessary liners, piping, pumps, and such needed for the project was easy, but finding the right stone was going to make or break this pond and waterfalls.  The project area had some natural stone outcroppings that we wanted to work with.  The whole idea around the project was that if we did our job right it would look like the resort was built around this feature.  Just any old load of boulders wasn’t going to cut it.  Fred reached out to one of their local suppliers to see if they had any weathered stone around.  After taking a ride around with the owner the mother load was located, in a back corner of one of their properties.  These stones were beautiful.  Many were covered in moss and lichen and would blend in with the natural ledge stone on site incredibly.  Some of the larger boulders even had ferns growing right out of them.  Now with stone and supplies taken care of the final piece was to bring in a few water feature artists to help make this feature incredible.  Leveraging industry relationships, Fred reached out to friends from around the country that he had worked with previously on large projects and knew would be able to help build this special project.  He brought in Sean and April from Naturescapes (New Hampshire), Matt from ForeverGreen Landscaping (Massachusetts) and John, Tristan, and Hunter from Modern Design Aquascaping (Tennessee), to join the DeFranco team.  This truly was a group of great talent.

Working over the summer and fall of 2018, the team worked hard to create an incredible oasis at Blue Water Manor.  Every rock was hand picked and carefully placed on the rubber liner.  Small hand work was done to make sure that every detail was covered.  Piping was carefully laid out and buried throughout.  A large paver patio was created for gathering near the pond.  Lighting was placed through the waterfalls and pond creating stunning views at night.  John and his team built beautiful rustic bridges and installed fencing around the entire project site.  When the pumps were finally turned on everyone was blown away.  What the team had created was truly a one of a kind masterpiece.  Over the rest of 2018 and into early 2019, hundreds of native shrubs and perennials were planted in and around the pond.  The final icing on the cake was the addition of fifteen large koi fish in April of 2019.  Our friends at Garden State Koi had hand selected these and had even trained a few of them to eat right from your hands.  A silvery blue koi named Wally, quickly became a fan favorite as he is always looking for a meal and will gladly eat right from your fingers.

When Blue Water Manor opened for the season in May of 2019 the pond quickly became a huge hit.  People would stop and stroll through on their way down to dinner.  Kids would be seen hanging over the cantilevered rocks feeding the fish and pointing out their favorites.  Wedding parties would line up on the bridges using the large waterfall for a perfect backdrop on their special day.  The space was used for several private functions through the summer quickly becoming a favorite unique space for local gatherings.  John can often be seen walking through the area with a smile on his face and snapping pictures of his favorite fish.  We were asked to create something special and judging by the reactions from everyone who sees it, we think we did just that.

Get in touch with us today for a consultation